LEARN MORE ABOUT OUR RESEARCH

The group’s research involves the chemical and chemoenzymatic synthesis of carbohydrates. This is undertaken to create new chemical tools to explore glycobiological function and for the application of non-native carbohydrate structures in medicinal chemistry. We are also interested in the growing requirement of carbohydrates as biomaterials, especially towards understanding polysaccharide structure-to-function relationships.

We are broadly interested in developing new carbohydrate syntheses towards the following:

The synthesis of complex oligosaccharide targets remains a cornerstone of glycoscience research and we have several projects ongoing in this area that are both fundamental in nature and linked to the industrial importance of carbohydrates. 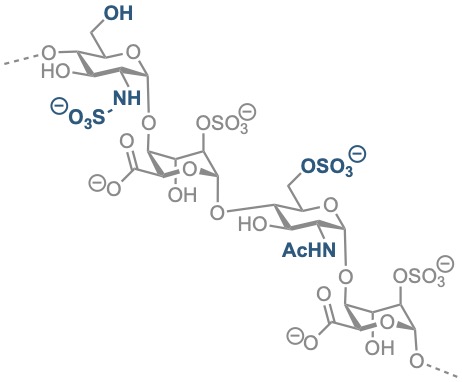 We are also working on the synthesis of structurally-modified alginate oligosaccharides, including:

Nucleoside analogues are historically accomplished as medicinal agents for the treatment viruses and a wide variety of cancers.

Here we are developing syntheses of next generation nucleoside analogues for evaluation against viral and oncogenic targets. This work is being undertaken in collaboration with US Biotechnology company Riboscience LLC.

GMD is critical to the biosynthesis of alginate, the dominant exopolyosaccharide produced in mucoid Pseudomonas aeruginosa strains. Alginate is thus a significant component of the resultant bacterial biofilms and causative towards the growing ineffectiveness of current antibiotic treatments. The biochemical reaction catalysed by GMD is illustrated on the right.

GMD catalyses the irreversible formation of the alginate building block, GDP-ManA (2) from GDP-Man (1). 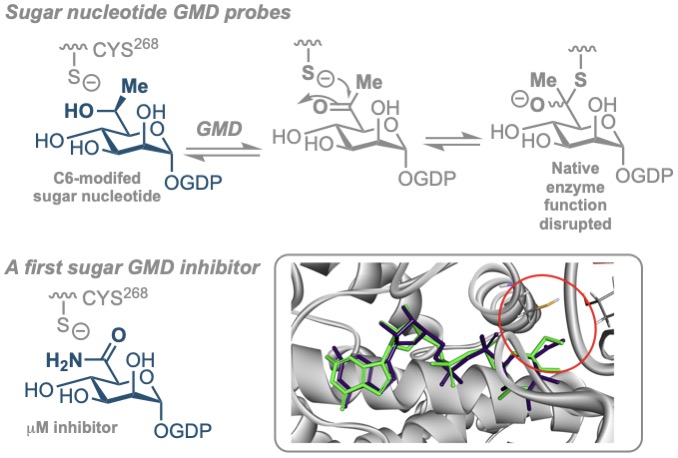 We are extremely grateful to Keele University for their continued support of our research, alongside the following Research Councils, industrial partners and charities.

We use cookies on our website to give you the most relevant experience by remembering your preferences and repeat visits. By clicking “Accept All”, you consent to the use of ALL the cookies. However, you may visit "Cookie Settings" to provide a controlled consent.
Read MoreCookie SettingsAccept All
Manage consent

This website uses cookies to improve your experience while you navigate through the website. Out of these, the cookies that are categorized as necessary are stored on your browser as they are essential for the working of basic functionalities of the website. We also use third-party cookies that help us analyze and understand how you use this website. These cookies will be stored in your browser only with your consent. You also have the option to opt-out of these cookies. But opting out of some of these cookies may affect your browsing experience.
Necessary Always Enabled
Necessary cookies are absolutely essential for the website to function properly. These cookies ensure basic functionalities and security features of the website, anonymously.
Functional
Functional cookies help to perform certain functionalities like sharing the content of the website on social media platforms, collect feedbacks, and other third-party features.
Performance
Performance cookies are used to understand and analyze the key performance indexes of the website which helps in delivering a better user experience for the visitors.
Analytics
Analytical cookies are used to understand how visitors interact with the website. These cookies help provide information on metrics the number of visitors, bounce rate, traffic source, etc.
Advertisement
Advertisement cookies are used to provide visitors with relevant ads and marketing campaigns. These cookies track visitors across websites and collect information to provide customized ads.
Others
Other uncategorized cookies are those that are being analyzed and have not been classified into a category as yet.
SAVE & ACCEPT